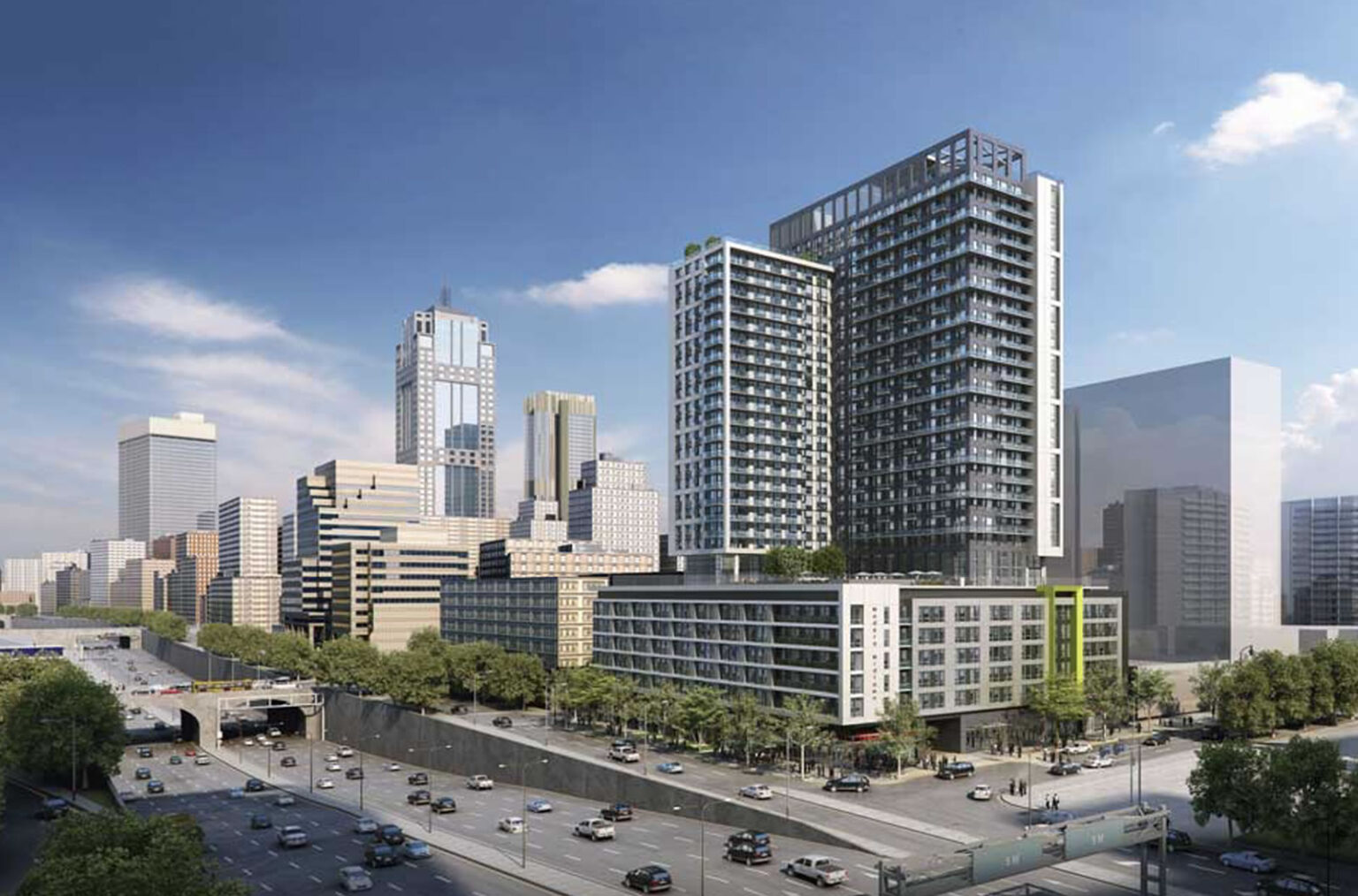 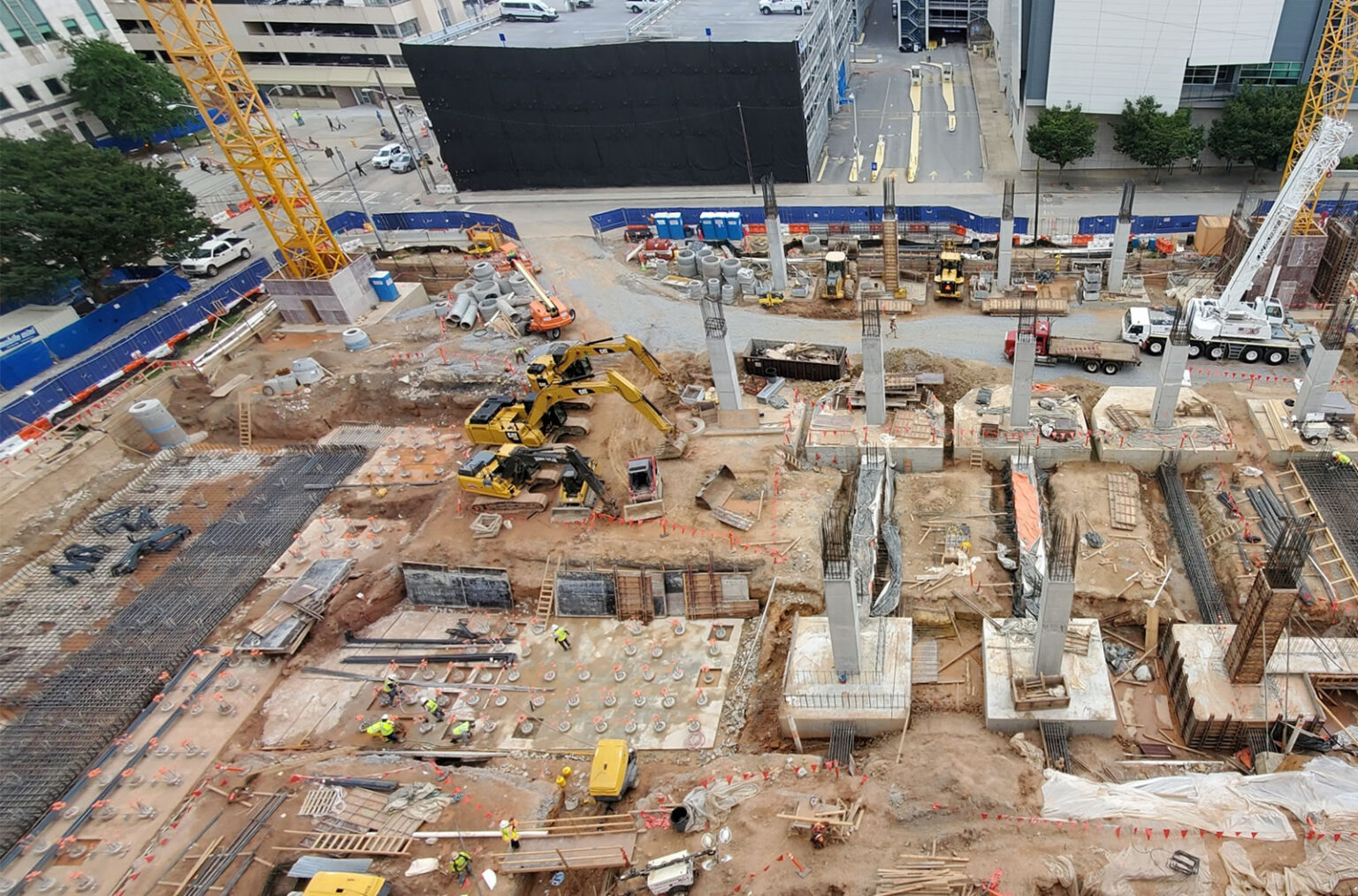 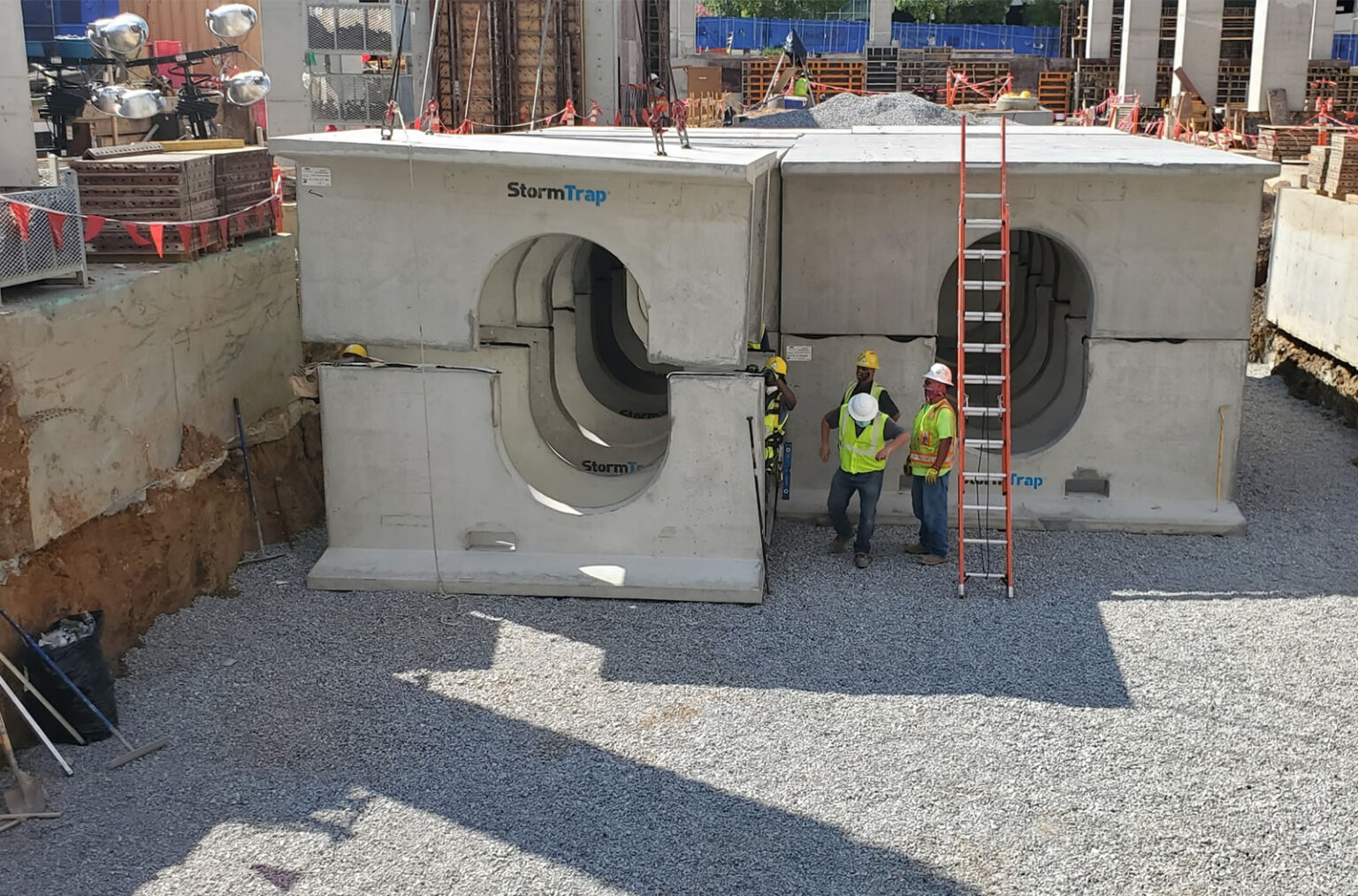 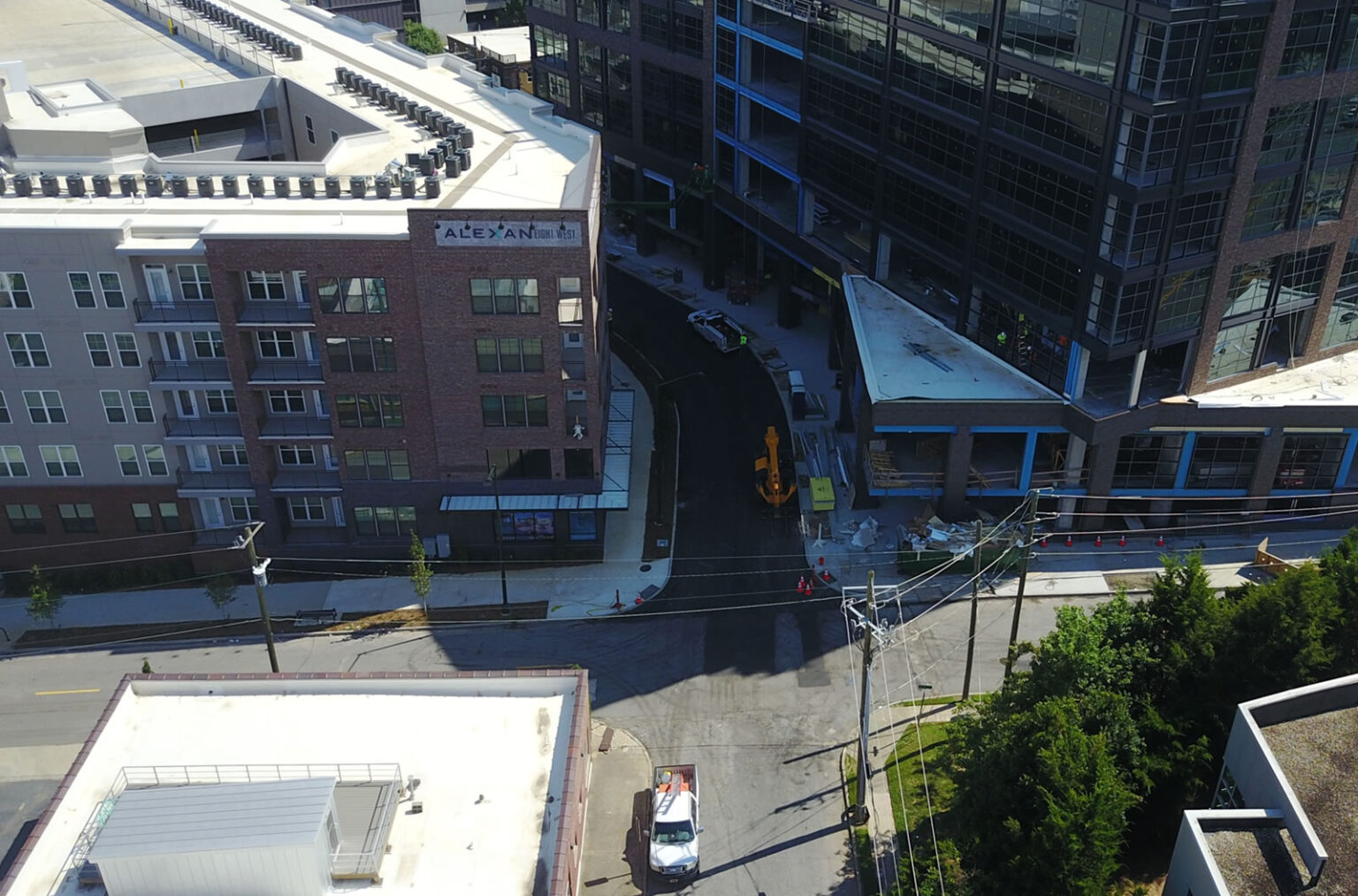 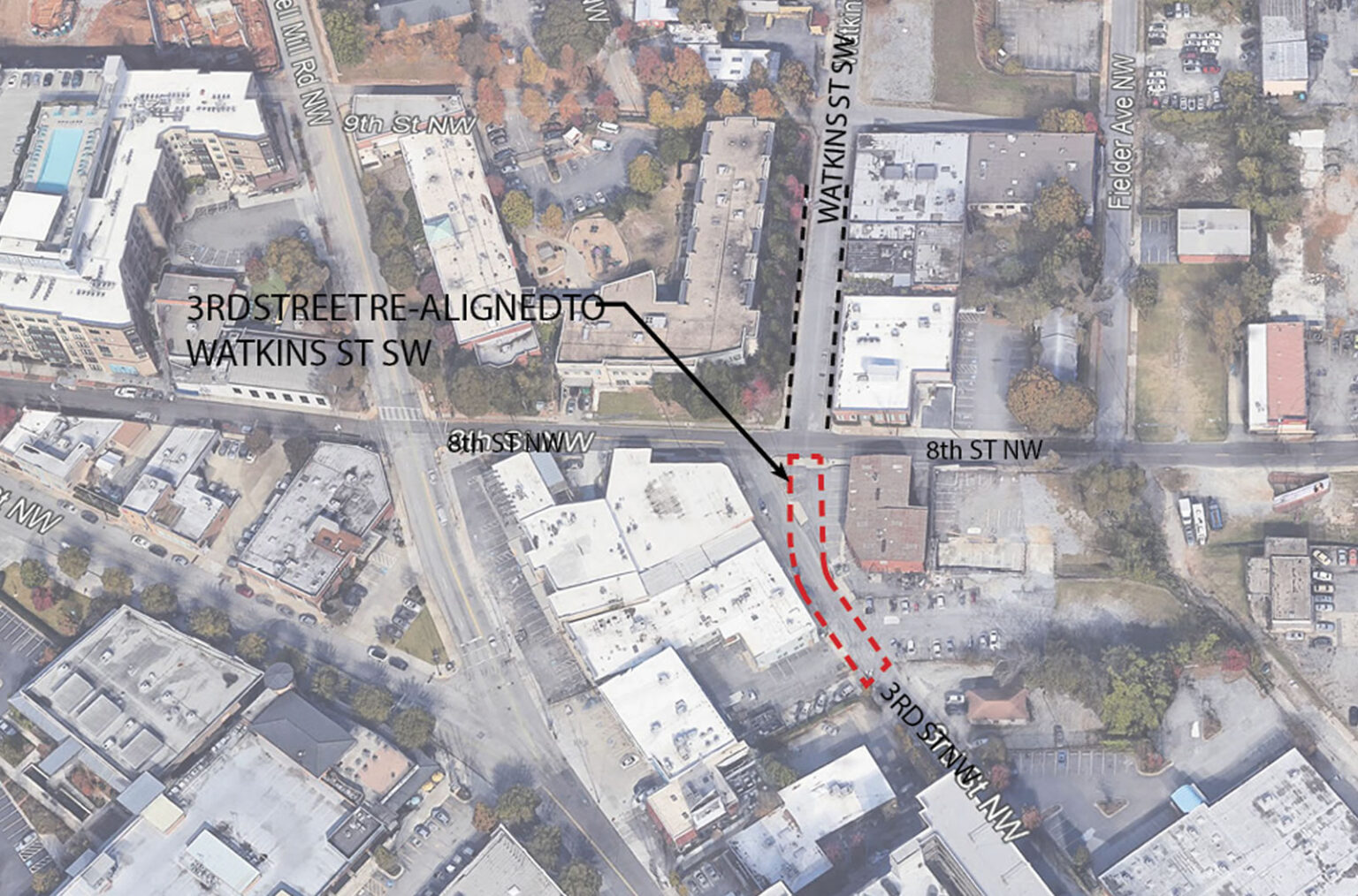 The intersection of Third and Watkins Streets in West Midtown Atlanta was misaligned, creating obstructed lines of sight, difficult turning radius and often unexpected slowing of traffic along 8th Street, a connecting artery between Howell Mill and Northside Drive. The new 180,000 s.f. office building along the west side of Third Street and the 265-unit apartment and retail development along the east side will generate a significant increase in both pedestrian and vehicular traffic along the street and through the intersection.

With no planned stop signs or stop light, the increased traffic was a significant concern for the two separate property owners and City of Atlanta. Our civil engineering team designed the realignment to create a perpendicular intersection with better lines of sight and safer vehicular and pedestrian circulation.

Because the development had two different property owners, the intersection realignment required a complex real estate transaction between the two property owners and the City of Atlanta. Once the real estate acquisition and land transfers were completed, the intricate civil-site design efforts were engaged to relocate all of the City of Atlanta public utilities to the new right of way.

Third Street had limited traffic prior to this development allowing the contractor who was simultaneously working on the building and the roadway construction to close the street and use it for construction staging.

The resulting intersection with a safe and traditional traffic pattern creates a more walkable community and provided the opportunity for the 8West Office building developer to add public facing amenity space.

For many years Ninety-Five 8th Street was not able to be developed. A 60-inch combined trunk-line ran diagonally across the site. The prescribed easement created a 65-foot swath across the middle of the property where nothing could be built. From an engineering perspective, the adjacent streets had several conflicting utilities in the right-of-way and the shallow a pipe slope limited relocation options.

With the resurgence of Midtown Atlanta and the prominence of this site along the 75/85 connector, our team was challenged to find an engineering solution to create a buildable site. In meetings with the Department of Watershed Management we investigated the potential of relocation the trunkline to the right-of-way. We designed a best-case scenario path and alignment then worked with the City to model the optimum size. Upon approval, our engineers carefully monitored the relay of the new trunk alignment and connection with existing system. The result was a site free and clear of the infrastructure burden and available for development.

See what is on the site now.

Stormwater Management Systems within on a tight urban site.

Underground stormwater management systems are the norm on tight urban sites. These systems can be designed and constructed as cast-in-place facilities or as modular systems built within or around the foundations of the building. Each system is typically selected based on their respective benefits.

While coordinating with the other design and engineering disciplines working on the Grady CASS building, the team worked through many design options for the stormwater management system. Given a tight project schedule for this large hospital expansion in downtown Atlanta, our team chose a StormTrap pre-cast modular system. Our team designed a five-vault system to fit within the limited building footprint. Three cisterns are used for detention and two for rainwater harvesting. The rainwater system captures the first one inch of rainfall from the roof and then pumps the treated water for use in the building’s cooling tower. The team modeled the modular vault and worked through clashes with a 3D design management software to ensure there were no conflicts with other disciplines prior to installation.

Due to close proximity of the building foundations, the lateral forces from the adjacent foundations required a specially design vault system.

See our other healthcare experience.